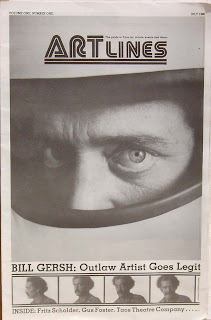 ﻿﻿
﻿For some years Bill Gersh was identified with what was perhaps the only school of contemporary painting in Taos--Junk Art. Gersh, David Pratt and Otero Goodsky were the most prominent members of this school characterized by rough edges, cheap materials, great energy, and often psychedelic imagery. These outlaw artists rejected the traditional aesthetics and ethics of fine art. Their purpose was shock.
The Junk Art school of Taos is now all but dead. Goodsky and Pratt have moved on to Santa Fe, and Gersh has come out of the closet as a creator of fine art. His new work deals principally with the mythology of the American West. But he doesn't deal with it as Charles Russell did, or as Gary Niblett or Harland Young do now. The painting is authentic Gersh and that means painting with an intensity of focus that can be exhilarating or terrifying, depending on your sensibility. The work is direct, immediately accessible, energized. Someone said that obsessive intensity signals the presence of real talent. That's certainly true of Bill Gersh.
The following interview was conducted on several occasions last month at the artist's studio, which sits on the side of Lama Mountain, a half hour north of Taos.
Let's dispense with the old business first. Where are you from?
I grew up in upstate New York, and studied painting with Ilya Bolotowsky at the State University of New York at New Paltz He was a pretty well-known post-Mondrian purist, a minimal painter, off-shoot of Albers. After graduating I taught for a while, waited tables in the Catskills, and, in the mid-1960s, I spent a lot of time doing art in Woodstock and New York City. I was doing outdoor, environmental pieces in those days, 8mm movies, choreography, theatre pieces, everything. A lot of these things were influenced by Nine Evenings, a series of events Rauschenberg and Alex Hay did at the Armory. They really blew me away. I was doing happenings out in the fields upstate, or in the woods, happenings with people. I'd take all sorts of stuff out there from the town dump. It was great, but it was non-accessible. I wanted to use other tones of the imagination. Then, in 1966, I moved to Berkeley to see what the Flower Child-Hippie thing was. I got into metaphysics, and for a while I painted little Buddhas and psychedelic things.
How did you get to Taos?
In a 1948 maroon and purple Dodge. Berkeley got boring, so my old lady and I drove here. She had 20 avocado plants in the car and a cat, and we had a big tent. That was 1968. Like a lot of people when they first move to Taos, I went for walks in the sagebrush and collected all the old bones I found. The first piece of art I made here was a bone boat, built on an old wagon. You could walk into it, sit on it, everything but move it. It was out behind my house, and I just left it there. My rent in those days was $30 a month.
Taos was a violent place in the late '60s, wasn't it?
There's a long history of violence in Taos. The hippies never learned to get along with the natives. This place isn't a blend, like New York. It's really a separate part of America, and the hippies didn't respect that. They were pushy, a lot of them, so there was violence...at the hot springs, in people's homes. But I wasn't looking for trouble, so I didn't find much.
Were you a part of the communes?
Yeah, I was into the whole communal movement, first at the Walden School in San Cristobal where I worked with exceptional, autistic children. Then I moved to the Reality Construction Company, which was a legal, inter-racial insane asylum. And in 1971 I moved up to Magic Tortoise, where I still live. We share land, food and certain responsibilities. It works very well. Most of the communes didn't last. The utopian ideal fizzled when people found they had to work hard to make things happen.
But you're still here.
This is my home. I'd like to spend more time in L.A. and New York, the centers of energy. But this is an important energy source, too. The spaces up here! The woods are a blocked up visual space, but then I can turn, look out to the west, and see for 120 miles.
You went for quite a long time without doing any art, didn't you?
From 1968 to 1976 I didn't do any art, at least not formal art. I did a little drawing and a lot of thinking about art, but basically I was into building--the sculpture of building a house with mud, drawing by laying out a fence line. At the time, I thought that kind of art was deeper, or more significant, than doing specific, literal, traditional art. 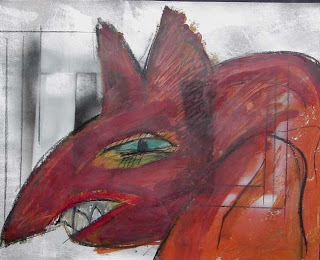 The work you've been doing the last few years isn't exactly traditional, but it is back to art in the formal sense.
Yes. Sometime in 1977 I changed my attitude and got back into working at making art. It's become the most important part of my life, putting out this magic for people to see and deal with.
How would you describe the painting you're doing now?
It isn't naive, it isn't minimal, it isn't Pop, it isn't Abstract Expressionism. I don't dig labels.

In general.
I've got a couple of series going--Gunslingers, Cowboys, Nudes and Masks. I guess you could say I'm getting into Western art. Recently I reread Gunfight at O.K. Corral and I began thinking about the romanticism of Louis L'Amour, and about the cowboy painters, especially the schlock ones. I'm not putting them down, I don't want to make any judgments, but what I think I'm doing is retranslating that Western imagery. The nudes, for example--I'm taking nudes that used to hang behind the cowboy bars. Those guys knew every nook and cranny in those nudes! They got a lot of pleasure out of them. And, if you think about it, guys today with porno magazines are really very much the same.
Are there the same parallels between the gunslingers you paint and criminals today? Or real cowboys then and Santa Fe cowboys today?
There are lots of very American things going on that don't change. The Gunslingers series, for example. Number one is based on a photo of Tennessee Williams, two is Keith Richards, and three is Truman Capote. I'm taking off on these guys, dealing with the gunslinger in each of them, and myself. And the cowboys, the Trailmaster series. I'm into these guys as serious legends, both the actual job of being a cowboy, and the cowboy when he puts on his fancy clothes and goes into town for the weekend. The cats in L.A. making movies, they dress the same way on the weekend. They live out this same Western American fantasy about the cowboy. They're feeling the same thing. Even in Taos, of course, you can't be a real, wild cowboy any more, unless you've got a lot of money. I mean, Dennis Hopper doesn't walk around looking like a golfer! He's a contemporary cowboy. He's got that energy going.
You've got the reputation of something of a wild man yourself.
I know. People say, "There goes crazy Philip," or "Isn't that Wild Bill Gersh?" That's an aspect of my personality. Sometimes I do things a little outrageous or deviant from the norm, but there are other parts of me no one sees or knows anything about.
Like the time you spend here in the studio?
Yes. I don't have an evenness in me. I never have. Like the stands I've taken--Abstract Expressionism versus Pop art, or the Vietnam War, or things I said to people that shook their socks off. I want to make people more aware. Some people can deal with it, and we have a dialogue, others just call me crazy. But I can't categorize myself. If somebody wants to, fine. I build houses, I irrigate the alfalfa fields. I paint. I do whatever needs to be done so that I can be a free spirit.
Why do you paint? Is that a fair question? Are you telling stories with these works?
Yes, they have their stories behind them, but the stories aren't important. The endgame of the story is up to the viewer. If he wants to make up a story, fine. If it happens to coincide with my story, fine. But what I'm interested in is a painting. That's the end for me. When I get into a painting, a Gunslinger, a Mask, I'm feeling painters' feelings. Sometimes I tell stories or make political statements, but usually my purpose is just visual, putting visual energy into an image. I want you to say, "I can live with this painting some of the time, but not all the time." Don't say my work is beautiful.
When I'm feeling especially strong or free or kind of wild myself, I might well think some of your paintings are beautiful.
You're as nuts as I am.
Your last show in Taos was mostly sculpture and works on paper. Now you're back on canvas. How come?
First of all, a guy fronted me the money for the canvas and the stretcher bars! But beyond that, I wasn't very happy with the way my work was being received. I went through that native, found object phase in my sculpture. It dealt with African imagery, shrines, death boats. I'm dealing with some of the same stuff in this Mask series, but now I'm trying to simplify my messages. That heavy cacophony of images was a phase that wasn't read like I wanted it to be read. It was too scary. And people called it junk art, or hippie sculpture, and I wanted to convey a statement beyond those labels. But the work just got too verbal. So I'm simplifying.
I agree the painting is simpler, but I also think it's somehow more demanding. Maybe it's deeper.
Maybe that goes back to the business of modern painting. If the viewer is going to appreciate it the way I do, he has to have a sensitivity, a knowledge of art, an understanding of paint, line, an understanding of shape, and an ability to get away from a story. This stuff I'm painting is my own version of contemporary Western art. I was afraid of it for a while. Now I'm not. I can paint a cowboy as good as anybody, maybe better.
You're doing a lot more with color, and some of it, like the mauve in the Nude series, is reminiscent of Tony Magar's use of color. Is it fair to suppose he's influenced you?
Undoubtedly. This is a small town. I think a lot of us affect each other, and I think it's good. Tony's a monster painter. But, you know. somebody else would come here and see Rouault in that one, or Modigliani in that Mask.
What's the title of that Mask?
That's Plastic Man's Daughter in Ranchos. She's far out.
July, 1980 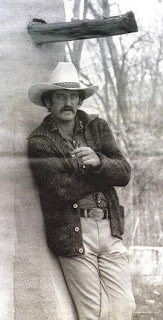 Stephen Parks
Owner and director of Parks Gallery, Taos since 1993. He has written several books, including "Jim Wagner: An American Artist" (Rancho Milagro Productions, 1993), and "R.C. Gorman: A Profile" (NY Graphics/Little Brown, 1981). He's written introductions to "Melissa Zink: The Language of Enchantment" (New Mexico Magazine Press, 2006), and "Douglas Johnson:A Painter's Odyssey" (Clear Light Publishing, 1998). Parks co-founded ARTlines in 1980, a journal on arts in Santa Fe and Taos he edited through 1985. A Taos resident since 1973, Parks is also an actor, director and playwright.